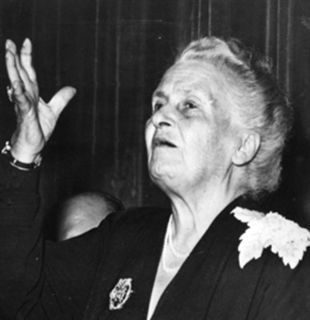 11/3/2015
Biff Maier, Director of Faculty and Curriculum Development
Dr. Montessori argued that schooling must include global citizenship, personal responsibility, and respect for diversity. She insisted that children develop the habit of critical and independent thought.
On the occasion of her nomination for the Nobel Peace Prize in 1949 Montessori wrote a letter to heads of state telling them that young people must learn from the beginning to think for themselves so they can resist propaganda.

“In spite of the terrible lessons of two world wars, the times ahead loom as dark as ever before. (Adults) remain bewildered in the maelstrom of conflicting ideas, and they throw (themselves) now on this side, now on that. …Man must be cultivated from the beginning of life when the great powers of nature are at work. It is then that one can hope to plan for a better international understanding.”

Dr. Montessori was pessimistic about adults’ ability to understand and overcome the bias that infects our thinking. “Something has remained buried in the subconscious, and an incrustation of prejudices, difficult to break through, has formed over it.” She put her hope in the coming generations, saying, “When prejudice is vanquished by knowledge, then there…will appear the child who is destined to form a humanity capable of understanding…our present civilization.”

Creating Peacemakers
Peacemaking begins with observation and listening. We teach children about respect when we listen carefully, dignifying their experiences and opinions. They, in turn, learn to listen and to observe.

Multicultural education is an inextricable part of peace education. At LMS we give children windows through which they can see and appreciate differences, and we give them mirrors so they can see and honor themselves. Our cultural curriculum is built around recognizing similarities among people and celebrating differences.
From the very beginning of their experience at LMS, children learn about peaceful ways to resolve conflict. Toddlers learn to see a friend’s sad face; Children’s House kids use a peace rose to help them listen to each other; elementary children learn how to speak so others can hear; and elementary and middle school students practice problem solving strategies. They learn that, truly, if they are not part of the solution, they are part of the problem: they learn to be “upstanders,” to take action against injustice. Montessori education at LMS is schooling for global citizenship, personal responsibility, and respect for diversity.
Back
Date Posted
No comments have been posted